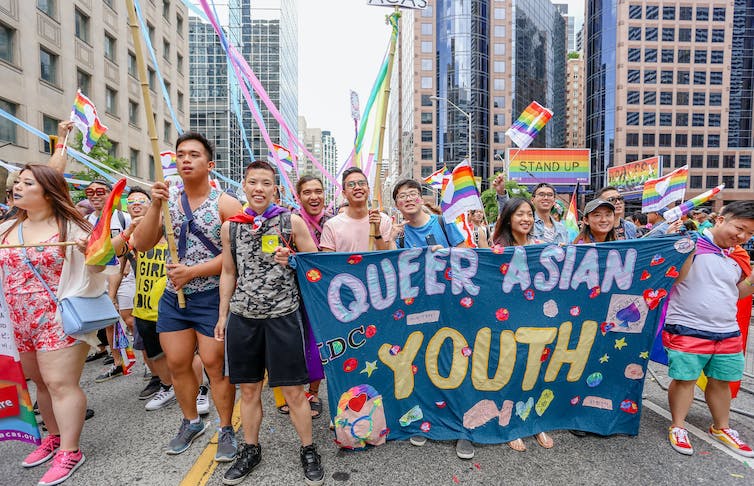 During the holidays, most people — including young people — spend more time at home and with their families. But home and family can feel different based on varying levels of support from one’s family. Our research found LGB (lesbian, gay and bisexual) youth’s perceptions of family support remained the same or, in fact, worsened from 1998 to 2013.

Our study’s trend analyses show that, generally, youth’s perceived parental support and family relations have improved steadily since 1998. As hopeful as that might be, the LGB youth in our study — average age 14¾ years — don’t see their parents and families as being as supportive as their heterosexual peers do, or indeed as they used to. It’s a striking difference when you consider that attitudes toward LGBTQ+ people have generally improved over time.

I study parent-child relations in the context of the family. In particular, as an associate professor at Concordia University in Montréal, I study at-risk youth. I also belong to a research centre, Stigma & Resilience Among Vulnerable Youth Centre (SARAVYC) at the University of British Columbia, which is connected to the McCreary Centre Society, a non-profit organization in Greater Vancouver aimed at improving the health and well-being of youth.

Parental support and family connectedness are key factors in supporting health and well-being in adolescents, especially sexual-minority youth. For example, LGBTQ+ youth are at greater risk than heterosexual youth of being harassed and victimized at school. In the face of such negative experiences at school, parents’ support can act as an important buffer. But what if parents are seen as being less supportive of their LGBTQ+ children? And why might this be so in the light of improved attitudes toward LGBTQ+ issues?

Our study looked at how adolescents’ perceptions of family connectedness and parental support (tested separately by gender) changed over a period of 15 years beginning in 1998 — among heterosexual as well as sexual-minority youth.

Beginning in 1998, and every five years since, the McCreary Centre has conducted a comprehensive B.C. Adolescent Health Survey. Almost 100,000 adolescents have participated in these surveys over a period of 15 years from high schools across British Columbia, representing 75 per cent of B.C. school districts.

Using four waves of the B.C. Adolescent Health Survey (1998, 2003, 2008, 2013), our interdisciplinary team (under the direction of Elizabeth Saewyc, Director of the UBC School of Nursing) looked at perceived family support variables (such as family connectedness, mother support and father support) in four different groups of students: heterosexual, mostly heterosexual, bisexual and lesbian/gay. Our data did not include trans, queer or other non-LGB sexual-minority youth youth.

A trailer from Kiki, a 2017 documentary about queer youth ball culture, which developed out of a need for LGBTQ youth to have a safe place of their own and find families that support them.

For bisexual youths, means of perceived mother support dropped significantly between 1998 and 2008 (the year of reference for that variable). A similar drop in perceived support from mothers was found for lesbian girls. For gay boys, however, there was a significant drop in perceived support from fathers. We also found that existing disparities between heterosexual and LGB youth’s perceptions of family support widened over time. That is, while heterosexual youth see their families as a source of support, LGB youth are less likely to do so.

A Widening Gap In LGBTQ2S Rights

Our study does not have data to address why LGB youth might see their families as less supportive than heterosexual youth do. We can, however, speculate. LGBT youth are coming out at earlier ages now than in the past. For example, parents of a tween who comes out might be more upset than if they had an adult child in their 20s or 30s who comes out.

Public interventions such as parenting programs like the Family Acceptance Project can help parents who initially reject their LGBTQ+ teen learn how to accept them. In addition to more basic research, we need to develop and offer programs to help parents be more supportive of all of their children.

Since the passing of the Civil Marriage Act in 2005 legalizing same-sex marriage in Canada, many Canadians assume that LGBTQ+ people in Canada now have equal rights. Our research, however, shows that these equal rights have not trickled down to LGBTQ+ youth, whether at school or within their families.

[ Deep knowledge, daily. Sign up for The Conversation’s newsletter. ]

This article is republished from The Conversation under a Creative Commons license. Read the original article.